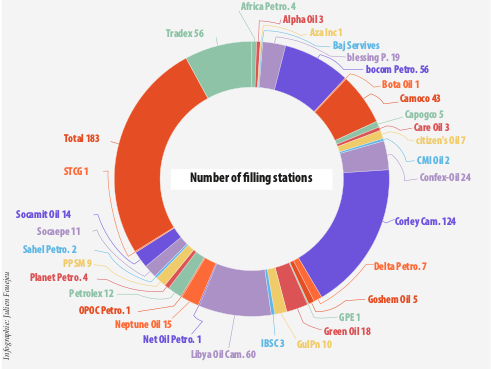 This follows the decision by government in 2000 to liberalise the sector. Nationals now control 52 p

Total 183 STCG 1 Corley Cam. 124 Socaepe 11 Sahel Petro. 2 PPSM 9 Planet Petro. 4 Petrolex 12 OPOC Petro. 1 Neptune Oil 15 Net Oil Petro. 1 IBSC 3 Libya Oil Cam. 60 48% Nationals Multinationals number are involved in the distribution of domestic gas. Delta Petro. 7 Goshem Oil 5 GPE 1 Green Oil 18 GulPn 10 Nationals making staggering in-roots into fuel distribution (December 2016). increased from 800,000 to 2.3 million. Meantime, storage ca- pacity for fuel has risen from 2,321 tons in 2000 to 4,219 tons today. Nationals that have stamped their footprint in the fuel distri- bution business include Bocom with 56 pumping stations and absent only in the Far North. Camoco operates 43 stations in seven regions while Confex-Oil spreads 24 fuel stations in eight regions. At the bottom of the ranking, seven companies with just one filling station including Aza Inc, Bota Oil, GPE, and STCG among others. Of the 55 fuel distribution companies in the country, only multinationals like Total, MRS and Oilibya are present in all the regions. Going by statistics from the Ministry of Water Resources and En- ergy, the greatest numbers of filling stations (117) are in the Centre Region while the Before the year 2000, the petroleum sector in Cameroon was entirely a prero- gative of multinationals. Total, Mobil, Shell and Texaco are some of the names of retail stations that were conspicuous. Some were bought over by others and new names like Oilibya, Corlay MRS emerged erasing Shell, Mobil and Texa- co. With the liberalisation of the sector in 2000, nationals joined the sector with First oil being the first indigenous distri- butor to be created. Today, a myriad of distributors have cropped up including Tradex which has even gone internatio- nal with filling stations in some CEMAC countries. According to the Minister 742 filling stations spread across the country 4,219 is the storage capacity of fuel today. Littoral and the West regions have 175 and 101 respectively. Recurrences The downstream oil sector in 2000, the year of complete liberalisation was virtually in the hands of three companies in Cameroon; the National Refining Company (SONARA), the Oil Price Stabilisation Fund (CSPH) and the Cameroon Oil Storage Company (SCDP). All of these were and are still, basically State owned corporations but the whole gamut of retailing bu- siness to consumers was in the hands of multinational companies who ensured the distribution of petroleum pro- ducts through filling stations scattered across the country. The French group, Total was among the best distributors. The company shared the mar- ket with America’s Mobil and Texaco as well as Anglo-Dutch Company, Shell. Texaco and Shell were later acquired by the Nigeria Company Corlay under the brand MRS. Mobil on its part was taken over by the Libyan Company, Oilibya. British Petroleum (BP) left Cameroon within this period selling its assets to Shell. Produits pétroliers Significant Progress Though! 52% 13 out of the Confex-Oil 24 FACTS & FIGURES Market shares 55 companies involved in the distribution of fuel in Cameroon. CMI Oil 2 Number of filling stations Socamit Oil 14 rior to 2000, fuel dis- tribution was in the hands of few multi- national companies who made mouth-watering profit. The supposed mono- poly was enjoyed for a while before the liberalisation of the sector on November 13, 2000 by the Cameroon government, which greatly facilitated the conditions to operate an oil outfit. Many nationals came into the business increasing the number of fuel distribution companies from four in 2001 to 55. As at press time, the 55 companies spread across the country in 742 filling stations with Total alone having 183 and controlling 26 per cent of the market, followed by MRS with 124 fuel stations and Oili- bya with 60 while Bocom and Tradex occupy fourth position with 56 pumping stations each. Thirteen of the 55 are involved in the distribution of domestic gas where consumption has risen from 30,000 to 90,000 tons and where the number of bottles in circulation has